My current main project is to build a wireless sensor network. However, for various reasons I am currently blocked from doing any real work on this project - so I thought I would blog about my plans instead!

The goal of this project is to be able to take readings from wireless nodes placed around my house (and possibly in my garden). This provides the following requirements.

To meet these requirements I plan to combine the following into a single wireless sensor node.

This comes to a grand total of about £11 for a single wireless node. This seems to be about as cheap as you can get it.

The rest of the setup will be made of the following parts.

Here's a picture of a Raspberry Pi because every blog post should have a picture. 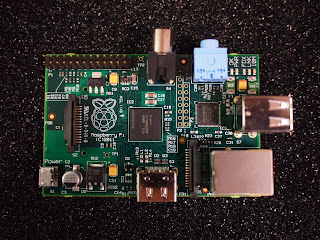 I also have plans to build a physical display to show the latest readings.